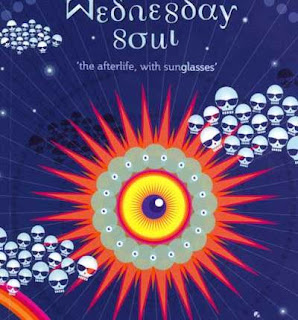 The Wednesday Soul by Sorabh Pant is a bit better than most of the "mass-market" publishing that is  so much in vogue currently in India. The book ostensibly is a funny and sarcastic look at life after death or as the tag line puts it "the afterlife, with sunglasses."

The Wednesday Soul tells us about the afterlife of Nyra Dubey. Nyra Dubey is an urban vigilante who roams around Delhi in the night avenging any crimes against women. Nyra is overweight, has a slight chip on her shoulder about it but is spunky enough to not really care a damn. She meets the love of her life, Chitr Gupta, who is apparently invulnerable to any physical harm. Just when she is fantasizing about life with Chitr Gupta, Nyra is bumped off by Kutsa, the villain of the story. Nyra is not amused to be separated from Chitr and wishes to be with him. So soon Chitr and Kutsa clash and end up in afterlife. And from here on the story moves largely in two parallel lanes - the afterlife and the mortal "real" world - with the events in one impacting the other.

It is also from this point that the book loses its plot. Sorabh Pant is a stand-up comic of some reputation. The book is written and "delivered" in a similar style. There are a few parts of the book that, when take alone, are really funny. There are elements that have been weaved in purely for their potential for humor and which do not have any bearing on the story. So you have a Lenin who spews Russian Comedy to people standing in the afterlife's many queues, there's Agatha Christie who functions as a sort of a psychic detective and some extremely bad puns. There is also a half-hearted attempt to "play" with mythology and mythological characters. And there is an attempt to mix this all with current lifestyles and concepts. So Nyra is a "Wednesday Soul" -- the mid day of the work week that is so frustrating that it makes people suicidal. Wednesday Souls are thus people whose subconscious drives them to harm themselves by either putting themselves in the path of danger (like Nyra) or by something like binge eating or overworking - malaises of the current urban lifestyles. Sundays are sacred for such folks. Chitr is a Sunday Soul.

The book thus tries to mix in anything and everything in an attempt to elicit a joke or a laugh out of it. While that may be a good strategy for a stand-up comedy act, this free-wheeling does no wonders to a novel's story line. The Wednesday Soul's story, plot and narration are largely incoherent. The story is also full of inconsistencies (For example, Agatha Christie first communicates with Harithi in English and later only in Sanskrit) including some really crucial ones like the “Thinkers” viewing and knowing what is happening in the world, but being unable to locate the Third missing Sunday Soul. Such inconsistencies amplify the holes and shortcomings in the story's "plot" and  narration. The book is halos littered with significant editing and publishing errors. The book rarely engages the reader as it tries to entertain. The result is a book like an average comedy act. The audience will laugh and applaud once in a while, but the act as a whole falls flat and has got nothing that is memorable.

This review is a part of the Book Reviews Program at BlogAdda.com. Participate now to get free books!
— mandar talvekar Permalink: 3/23/2012