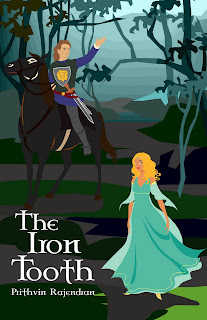 In The Hitchhiker's Guide to the Galaxy series by Douglas Adams, the Vogons are an alien race from the planet Vogsphere who are responsible for the destruction of the Earth, in order to facilitate an intergalactic highway construction project. They are the writers of "the third worst poetry in the universe." The only way Vogons get other races to hear their poetry is by capturing them and torturing them with readings. Prostetnic Vogon Jeltz captures Ford Prefect and Arthur Dent when they hitch a ride in his spaceship and reads out his poetry to them. The Hitchhiker's Guide to the Galaxy issues a terse warning: On no account should you allow a Vogon to read poetry at you.

People of the earth beware! The Vogons are here on Earth. And they are publishing novels.

I was reminded of Vogon poetry repeatedly as I read Prithvin Rajendran's, The Iron Tooth. I would have been immensely grateful if the book had not been published. Or at least if it had been published with a warning: On no account should you read this book. The only way I thought I could survive The Iron Tooth was if I could later slice open my head and scrub my brains in a vat of vinegar.

If you go just by the back cover of the book, Prithvin Rajendran's, The Iron Tooth, is yet another addition to Indian fantasy fiction. The book is set in the magical world of Goodbaiya. A young girl mysteriously becomes pregnant (in what seems like Rajendran's version of the Immaculate Conception), and is thrown out by her family and the city. She is makes a new home for herself at the foothills of the Mala Mountains. On a dark stormy night, she delivers two babies – one human and one troll. From the girl’s story, which functions as the prologue, the book then jumps to various other events. It then links back to the events in the prologue at the end. The first Chapter opens with the story of the great and mighty Dashtum, the good king of the kingdom of Dashter. His adventures cover about a page and a half and we move on to reading about his evil son, Darum, who takes over the kingdom after Dashtum's death. Darum is hated by his people who rebel against him repeatedly but without success. The beautiful princess Nova, Darum's eldest child is like her father – selfish, arrogant, and extremely rude. When she insults the master magician, Faerum, he takes the help of six other powerful magicians and the Custodian of First Light to avenge his insult. The Custodian of First Light curses the entire kingdom of Dashter so that it is perpetually covered with darkness. Princess Nova is imprisoned in a tower, which is guarded among other things by zombies wielding battleaxes. Here she waits to be rescued, forever regretting the grave mistake she had made.

The book then jumps to the kingdom of Greatix where a young man by the name of Princix, after acquiring magical weapons, sets out to become the champion warrior of the king of Greatix, Grantum. Using his weapons, he succeeds in completing all the tasks set out for him and so impressed is Grantum that Princix is made the Champion General of the kingdom. After becoming the Champion General, Princix is tasked by Grantum to find out what is wrong with Dashter. Along with Candlebre and Hammil, members of the imperial guard of bodyguards Princix sets out to remove the curse from Dashter. How Princix fulfills his quest, acquires the iron tooth, (from which the novel gets its title), wins Princess Nova's love and then goes on to rule the kingdom of Princeum forms the rest of the story.

Into this boiling and bubbling cauldron of a plot, Prithvin Rajendran throws in ingredients by the fistful: there's a sort of a magical mystic who foretells the destruction of the kingdom of Dashter and its resurrection by a stranger, there's a couple of envious brothers (who serve no other purpose than accompanying Princix on his first quest and then destroying his magical gifts later out of jealousy), a cabal of powerful magicians, a "duke" who is actually the ringleader of a band of thieves, grateful strangers who bestow magical gifts and weapons in gratitude for help, and medusas and vampires and zombies and trolls and giants, and the Baks (who are like Orcs) and the Massive Body Octopus and the Extra Large Locusts, massive owls and even two swords — one called the "Bastard Sword" and the other "Skull Killer".

Rajendran seems to go by the principle that if he adds all possible tropes from fantasy stories and fairy tales, stirring and stewing them together, the resultant tale would be something worth telling. He however forgets one important ingredient that makes even the most outlandish and outrageous fantasy tales such interesting stories to read and listen — the skill of the story-teller.

I remember being told in my school days the golden rule of writing: one main idea per paragraph with supporting details to aid and carry the weight of the central idea. It is amazing how impossible it is to err too much if you follow this simplest of rules while writing. Prithvin Rajendran tries doing something different. Sample this from the early pages of The Iron Tooth:


Elnix assisted the king in the administration of the kingdom. King Dashtum was pleased with Elnix's wise decisions and appointed Elnix as the head of the legal department. Soon, Dashtun married a beautiful commoner named Frisix. She begat him a son in C90 and they named him Darum. Dashtun and his family were loved by the people. Dashtum denounced corrupt courtiers and punished them. He was impartial in his judgments and allowed the people to play a vital part in the governing of the kingdom. His wealth grew beyond imagination and the kingdom was at peace.

While having even a single paragraph like the above is unforgiveable, Prithvin Rajendran writes the entire The Iron Tooth in the same fashion. Ideas, sentences, and paragraphs ramble and run helter-skelter. One never quite gets used to Rajendran's writing style and you struggle to hit some sort of a reading "rhythm or pace" while reading The Iron Tooth. I suppose I am being charitable to call it a style when it could be the acme of Rajendran's writing skill and abilities. So bad is the writing that it affects the story and the telling. I almost gave up reading the book in the initial few pages and had to summon great will power and gnaw my arm to continue. I often wondered if the entire harum-scarum story and plot reflected Rajendran's writing skills or did his writing reflect his scatter-gun imagination.


The Massive Body Octopus was a cephalopod of the order of Octopoda and had lengthy tentacles with suction cups in them and a soft body with no internal skeleton; it had neither a protective outer shell nor bones. The defensive mechanisms were its inks sacs and camouflage.

When he returns to Greatix after rescuing Princess Nova, Princix tell Ushix, his mother, about his adventures and laments the loss of Hammil's life. Ushix consoles him:


"Life is a constant struggle. Many times, we lose what we love. I know that is difficult to let go but it is best if we forget the past and move forward. Please go and take some rest."

If you felt that the prose itself didn't merit me invoking the Vogons at the beginning of this review, there's poetry as well. Prithvin Rajendran's The Iron Tooth labors under the belief that characters in "epic" fantasy (increasingly this term denotes a breadth of imagination and influences without any corresponding depth to give the story some substance) regularly break into song and verse. He fails to note that the verse has to be of impeccable quality. When Rajendran describes the various towns of the Kingdom of Greatix, we come to the towns of Aeros and Ratne. He tells us:

As the rivers provided fresh water, fishing was a major activity in the towns of Aeros and Ratne. The fish was a good source of protein for the people's diets. The people chanted,

During one of his early adventures, Rajendran tells us how Princix takes out three chunks of fish and places them on fire to cook them. And then he chants:


"O, what a smell!
I cannot wait to eat this fish
What weather!
The wind is serene
There is no worry
What calm!"

And later, while on his quest to Dashter, Princix comes across a pheasant and waxes lyrical:


"O, What a pretty bird!
Its feathers dry all our burdens
But what do we do?
We have to satisfy our hunger!
We have to kill this bird."

When such songs and poems occur on every other page of the book, you would be forgiven if you were to revise your opinion and declare the Vogons as high priests of excellent poetry and prose.

The Iron Tooth is a hotchpotch tale that seems to have a vague idea about the direction in which it is heading. Otherwise the story rambles, events are put down on paper as they occurred to the author with no thought to their relevance or the plotline. Prithvin Rajendran seems more bent upon cramming every influence and fantasy trope into his story rather than worry about the coherence of his tale. I have mentioned earlier that virtually every well-known trope and character from fantasy fiction and fairy tales seems to have found its way in The Iron Tooth. Would personal experiences and incidents be left out? In the Acknowledgements section of the book, Prithvin Rajendran tells us:


I also applied some of my personal incidents to the story. I cite one of them as follows: in January 2006, due to a minor fall, I got hairline cracks on two of my upper teeth and my lower lip was swollen. I applied similar injuries to Candelbre when he was attacked by trolls near the marshes of Troyae in Chapter 12.

That in a way sums up what to me The Iron Tooth is all about — a personal indulgence of the author. Books are, of course, personal and many a writer has channeled the personal into the fictional. Considering Rajendran's craftsmanship and his writing skills, I would have been happy if he had kept his story and experiences to himself and let The Iron Tooth stay unpublished.

These days publishing houses seem deem editors unnecessary, the least they could do is print the book with an appropriate and prominent hazard warning. I, for one, would be full of gratitude.

My exact sentiments. I would have given this book a shot had the writer tried his hand at writing actual prose rather than a disastrous concoction of sentences. The paragraph and the poetry were unreadable, and the fact that such a book exists in the market clearly tells us about the state of publishing. I am still waiting for a real fantasy fiction from an Indian author, someone who is not J.K Rowling, but more on the lines of Steven Erikson.