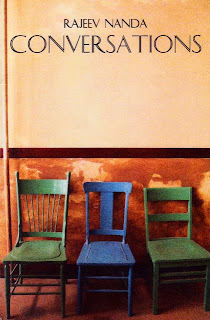 When I wrote about  Lucy and Stephen Hawking's attempt to bring theoretical physics to kids through George's Secret Key to the Universe, I had pontificated a bit on e-learning — on the process of using stories and scenarios to convey information, to teach. Much of what I had said then about e-learning can be reiterated again while discussing Rajeev Nanda's attempt to fuse literature and philosophy in Conversations.

When we design e-learning programs (I work as an e-learning developer), often the "teach" is masked within a "wrapper." This wrapper is an interesting scenario or a story, sometimes a generic theme, and nowadays, often a game, that aims to hook the learners and engage them enough to provide them the learning content. A good wrapper engages the learners and weaves in the "teach" in a way that it doesn't drown the "fun" elements brought in by scenario or the game. A good wrapper shouldn't overwhelm the teach lest the primary objective, the transfer of information, is lost.  Nor should the wrapper be so weak that the teach smothers the story. It is the wrapper that keeps the learner moving forward and is the impetus to complete the training. A good wrapper, as you must have realized, is difficult to conceive and execute — getting that perfect balance between fun and teach is a tough ask.

Now, if I haven't lost you and you are still around and reading this, you must be wondering how all this applies to Rajeev Nanda's Conversations. Rajeev's work is perhaps easier to understand if you view it through the simplistic lens of a wrapper. His stories and poems are but excuses, wrappers that provide a framework to philosophize on various aspects and dilemmas of life. For example, Soldier is a "story" that wonders about war and the boundaries between nations. GD, a soldier guarding a nation's borders expresses surprise that he doesn't see anything physical (like a wall) to separate one nation from another. So how do leaders know exactly which geo-political boundaries to protect? Why are the boundaries necessary? Why is it that the political leaders who don't fight are so eager to declare war? The Taxi Ride is a conversation between a customer and a taxi driver who is a reformed sandalwood thief and a full-time philosopher. The taxi driver's philosophical perspectives on illegal mining, men-women relations, marriage are juxtaposed against those commonly held by people like us personified in the story by the customer. Snowstorm, which starts off as a chance interaction between two passengers stranded at an airport due to a snowstorm, soon transforms into a psychoanalysis of marriage, expectations, and the choices that people make in marriage. Four Eulogies is vaguely Ayn Rand-esque in tone and intent. It attempts to explore the theme of "Living life passionately (and damn the world that doesn't understand your actions)." The Truth Club is about a group of friends who form a club that is a forum to provide brutal feedback — the truth — to each other. The story is an umbrella wrapper for each character's story and tries to point out how facing the truth about ourselves is perhaps the most difficult thing to do in life. Conversations has eleven such stories collected together, all of them attempting, as one of the book's blurbs puts it,  to "treat philosophy literarily and literature philosophically."

Hmm. . . . does Rajeev Nanda succeed in his attempt? Remember all that I had said earlier about finding the right balance between the story and the information when discussing wrappers. Conversations, failed to engage me on both counts — as "stories" as well as "philosophy". The problem with Rajeev Nanda's stories and story-telling is easy to identify — the wrappers just don't work. The story element in all stories is smothered, nay, steam-rolled, by the author's heavy-handed intent to cram it with his musings and philosophizing. None of the stories succeed or engage the reader as tales. If you are attracted to stories because of the fictional element — the tales themselves, you will be disappointed. The story-telling itself is not of high quality. Most "stories" are propelled by an author eager to create situations that enable him to share his perspectives and thoughts on various things. The story and story-telling consequently feels secondary, like an after-thought. To me, it felt like the author thought to himself: "Here's a perspective that I want to pontificate on, now what would be a story in which I can wrap this?" The philosophy seems to come first, the story follows later and is made to fit something for which it is inadequate. The stories are the weakest part of the two ingredients that the author has attempted to combine — literature and philosophy. The "hook" is just not good enough to bait and engage the readers.

The story-telling inadequate in another way. When you think of stories as constructs of words, it is immediately evident that Rajeev Nanda is no wordsmith. Nor does he have any hang of characterization and hasn't given much thought to his use of language. Therefore, a taxi driver spouts philosophy (which is not implausible) and talks about various social mores in words and with a sophistication that would be used by a highly-educated person (which is far fetched). Kids in college talk about precluding and anterograde amnesia. All characters talk as if they are reading out of an encyclopaedia. Rajeev is no master at conversations (pun unintended) and most of the interactions in his stories are like the ones we come across in badly written English plays performed by actors who are not natural speakers of the language — heavy, stiff and too formal.  The problem is that the minute Rajeev moves into his "philosophizing" mode in a story, the language switches too — and it switches from that which is natural to something out of a textbook. The effect is jarring and it makes the story a poorer experience. The author's awkward use of words and language leave behind an impression that a writer hasn't practiced his craft enough.

Let’s look at the second ingredient in the book, the "philosophy". Now this, to me, is the prime reason why these stories were written and published. I have used the word "pontificate" quite a few times in this post. That is deliberate. That is how Conversations comes across. It could be due to the author's use of language. The heavy-handed, formal register does give an impression of someone lecturing about his insights into life and living. There's nothing in the "philosophy" that is new nor is there a unique perspective on anything. Most of the thoughts and perspectives in the stories are something that I feel (and I am aware that I am generalizing) that any liberal, libertarian or a reasonably mature individual would have. Sometimes, in fact, the philosophizing is vaguely irritating. Snowstorm and The Truth Club are two examples of basic, commonplace psychological analysis masquerading as deep philosophy. Four Eulogies has an Ayn Rand hangover. All that pondering on vague boundaries between nations in Soldier has been said so much better by Amitav Ghosh in his The Shadow Lines. In none of the stories do you come across anything that provides a new insight into a situation. Some of it feels derivative. For a book that takes its philosophy so seriously (and for a book, which to me was written because the author felt that he had some insights to share) that is a big letdown.

The six poems in the collection are in the same vein as the prose. There is neither any good poetry, nor deep thought. The poems in fact come across as amateurish, the kind you see published in school and college annual magazines that rhyme and try to convey some profound thought.

Rajeev Nanda's Conversations, tries to occupy the space created out by the intersection of stories and philosophy. Sadly, neither the story-teller nor the philosopher have the ability to carry the book on their individual shoulders. This attempt at a three-legged race is then doomed to be just that — an attempt. It is earnest, yes, but then earnestness doesn't ensure a good story or a worthwhile insight into life.

This review is a part of the Book Reviews Program at BlogAdda.com. Participate now to get free books!
— mandar talvekar Permalink: 10/31/2011