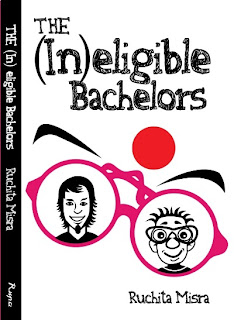 Rajeev Sir looked into my eyes and smiled that extra special smile of his. I felt as if my heart was made of butter. His smile is like a microwave. When the microwave is on, the butter melts.

I admit that at times I am slow. Slow to call a spade a spade. Perhaps I just didn't want to admit that I had made a grave error in judging a book by its blurb. It was only when I came across the above lines on page 92 of The (In)eligible Bachelors that I knew there was no getting away from nagging suspicion that had raised its head from the first page of the book — Ruchita Misra's The (In)eligible Bachelors is not a humorous satire on arranged marriage as it is positioned to be. It is unadulterated chick-lit.

The (In)eligible Bachelors is the story of the 24-year-old Kasturi Shukla, a geeky and single fresh MBA graduate. She is a management trainee in a Delhi office who is required to do not much but polish PowerPoint presentations. And Kas or Kassie (as she is called by her friends) would have been content with doing just that and bonding with her buddies Ananya and Varun. Unfortunately, her mother decides it is time she married. Like most stereotypical Indian mothers, Kasturi's mom initiates the process of getting Kasturi hitched, by first broaching the idea of an "Arranged Marriage" and then fast tracks it by publishing a matrimonial advertisement in the newspapers. She then shortlists prospective candidates (typical IIM/IIT/doctors) and browbeats and blackmails Kasturi into meeting these guys. With Ananya and Varun to support her, Kasturi embarks on a reluctant journey to find her Mr.Right. Things for Kasturi are not as simple as meeting the various guys that her mother has shortlisted (how could there be a story to tell otherwise?). She also develops a major crush on her handsome ("Greek God incarnate") boss, Rajeev Mehrotra, which soon develops into a relationship. For the readers then, the book is about finding the identity of Kasturi's Mr. Right — Is it Rajeev or does she pick one from the buffet of guys that her mom has lined up for her?

The (In)eligible Bachelors tells us about Kasturi's "quest" through her diary of this time. As one would expect, some of diary entries detail her meetings with the various guys who have responded to her matrimonial ad. A goodish bit of the diary is about Kasturi mooning for "Rajeev Sir." And some of it is about her interactions and relationships with her family and with Ananya, Varun and the other friends she makes during this time.

The (In)eligible Bachelors is largely formulaic. Virtually all the guys (but one) that her mother shortlists are either from the IIT/IIMs or similar institutes and are weird. Amay a.k.a. "Pita ji," from ISB, looks old enough to be her father and focuses his conversation on her zits. Kasturi's meeting with him is a disaster as she ends up getting the contents of an Oreo milkshake all over her. Pita ji and Kasturi, through various circumstances and mutual friends, do later end up being good friends. Another guy is interested in talking about himself (time that Kasturi uses to fantasize about Rajeev) and yet another consults a notebook and makes notes about the meeting. The only "nice guy" in this matrimonial buffet is Dr. Purva Dikshit who is super specializing at the AIMMS (yep, AIMMS). Purva is pleasant, attentive to Kasturi, mature, solid, dependable, etc., etc. and is probably something of an hero — he has scars from the time he tried rescuing somebody from a fire (hint: the hand that helps Kasturi up after the Oreo milkshake incident also has a scar). Well, if that doesn't forebode where the story is headed, readers should also note that Kasturi's dad is a doctor and (without having to bring Freud into to the picture) we all know what is commonly said about daughters looking for guys who are like their fathers.

The (In)eligible Bachelors jumps from one predictable and clichéd incident to another. You know Kasturi is going to fall for Rajeev and it doesn't need brains to realize that he is too smooth to be marriage material and that the relationship will end up in a disaster. You know Rajeev is going to be the bad apple (after all he is from an institute called IPPM — and if that is not a big enough hint . . .) and hurt Kasturi. You also see Ananya and Varun (who never have anything positive to say about Rajeev) will rally around her and come up with a plan when Kasturi and Rajeev announce their intentions to marry. You can even predict Purva becoming a fast and dependable friend who will always be around when Kasturi is in a crisis and needs a shoulder. There's nothing wrong with a predictable book — the pleasure of reading a predictable story is to see how the novelist has developed the plot and narrated the story. Wodehouse, to mention one writer, told the same basic story — of a guy meeting a girl and the two finding love — so many times in so many entertaining ways.

Ruchita Misra is no Wodehouse. Humor is a result of circumstances or created by a master craftsman out of language and wordplay. Wodehouse was a master at both. Ruchita Misra, very early on in the book (in fact, on the first page ) has her protagonist claim, "I can be really smart with words you know." There is little evidence in Kasturi's diary to back her claim. About the only remotely smart quip, that she comes up with is when she reacts to Purva's poor attempt at a PJ with: "I could crack better PJs than this even before I could speak." The attempts at humor in the book otherwise are juvenile, air-headed, and come with a large helping of mush on the side. Sample Kasturi's diary entry for 17 June, 2009:


I checked my phone forty-one times today for a missed call/call/message/missed message from Rajeev sir. This has been my highest count so far. I have to stop obsessing.
Or stop counting.


I checked my phone eighteen times today. The count is low and I am proud of that.

If this juxtaposition of counts and back-patting is supposed to induce a smile or a chuckle, it falls flat (or at least the attempt failed with this reader. All it elicited was a groan). Much of the "humor" in the book is of the same variety:

It perhaps works as chick-lit and might strike a chord with the kind of audience that goes for such books. To call it humor would require a generous spirit.(And yes, the second "No" quoted above comes without the period.)

In spite having a predictable storyline, it is surprising that Ruchita Misra has to resort to a deus ex machina to push the story to its resolution. In the story, the deus ex machina element is in the guise of two Tamilian nurses at the AIMMS hospital. The nurses discuss in Tamil, Purva's feelings for Kasturi (he loves her so much that he can't bear to see her in the slightest pain. Purva always gets another doctor to give Kasturi injections and turns away and winces when his colleague actually plunges in the needle). The two are oblivious to the fact (as are the readers, because it is never woven into the story earlier but brought in only at this point) that both Kasturi (who is in the same room) and Purva (who is in the next room and within hearing distance) understand Tamil perfectly — Kasturi knows Tamil courtesy of a Tamil ayah. So that's how it dawns on Kasturi that Purva loves her. Ruchita actually has to use this ruse twice to goad Kasturi into thought and action and that doesn't make for good reading.

There's a lot to kvetch about Ruchita's attempt at Kasturi's diary. I am not even getting into the technical aspects of how a first person narrative at times reconstructs events and dialogues of another person miles away. Nor am I going to dwell much on what passes for humor in this book (to be honest, I am sure there is a large audience for this kind of "mass-market" writing — it wouldn't have been published otherwise). Nor am I going to crib about how a predictable plotline is populated with numerous cringe-inducing incidents (For example: Purva and Kasturi eating paranthas out of a single plate or its mirror incident later — the two eating Maggie noodles out of a single bowl). I am also going to desist myself from wondering how Kasturi who is so full of doubts about Rajeev on page 182 (“he is never around when needed, none of my friends have ever said anything good about him”) can agree to marry him hardly a few page turns later. A piece of writing, published, and put out in the market as a book should however, at the very least, go through a proper copy-edit. A restaurant is called Big Chill on page 35 and transforms into Bill Chill on page 37 and back to Big Chill on the next page. Kasturi goes out for dinner with Rajeev on a Friday evening and then reacts to his Facebook update, "Rajeev Mehrotra had a lovely Saturday evening," with a "*swoon* . . . And I have not stopped smiling since I read the status." Am I the only one who is a bit confused with the timelines here? In most of her diary entries Kasturi is unable to decide between "Rajeev Sir" or "Rajeev sir" and uses either of the two liberally throughout. A good editor would have also pondered over Ruchita's choice of words: "The men smelled of cheap alcohol and their eyes had a luscious look that chilled me to my bones," (pg. 188). The author, I fear, like Kasturi, manages to "loose" her way a number of times.

The (In)eligible Bachelors perhaps can be viewed as the latest of the many Indian mass-market novels written in English that are currently in vogue. These are simple, easy to read stories with a non-taxing, barebones plot and narrative — stuff that many find compelling and connect with instantly. I, and that should have been amply clear by now, do not belong to that club. I find it truly amazing how so many people today have the self-confidence and the belief that they have a story to tell and that there is a publisher and an audience for their story. I feel if only these authors utilize some of their time in honing their craft, they would do themselves, their stories, and their audience a lot of good. Else, we are fated to come across stuff about which one can only comment: "I felt as if my brain was made of butter. This book is like a microwave. When the microwave is on, the butter melts."
— mandar talvekar Permalink: 10/08/2011

Ha ha ha!...Loved how you ended the review. It's saddening if youngsters/young adults are growing up on stuff like this and Chetan Bhagat.