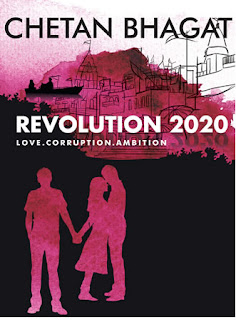 Chetan quit his international investment banking career in 2009, to devote his entire time to writing and make change happen in the country.

That is from the short (but extremely eulogistic) bio that appears as soon as you get past the cover of Chetan Bhagat's Revolution 2020 — Love. Corruption. Ambition. So, does this book measure up to that praise? That is a rhetorical question. For a Chetan Bhagat book, people will tell us, is not to be critiqued by literary standards. Chetan Bhagat's books sell and presumably, they have got people back to reading. It is a tad depressing though, going purely by what's in Revolution 2020, that Chetan Bhagat is India's literary star. It is even more worrying, going by numerous Chetan Bhagat interviews and what not, that his books are apparently making "change happen in the country."

Chetan Bhagat is increasingly à la Salman Khan in the Indian book industry — like the Bollywood actor, the author believes that anything he dishes out, will sell. His persona and the hype around his books ensure that his works make money despite what discerning readers and many reviewers think of the books' literary merits. Like Salman Khan's movies off late, Chetan Bhagat's books follow a tried and tested template. Structurally, Revolution 2020 is like any other Chetan Bhagat book — it kicks-off with a prologue which sets up the author as a sort of an amanuensis for someone's story, the story follows, then there's an epilogue in which the author comes back in the tale and ties or concludes something in the story. Somewhere in all this, Chetan Bhagat also puts in a couple of love-making scenes mandatory in his books.

The book's blurb asks: "Are you ready for the Revolution?" Revolution 2020 is supposedly about the current hot topic — corruption. More specifically, it is supposed to be an exposé of the corruption in the education system. Presumably, it is about a revolution that is to come and sweep away the Augean stables that is present day India. Is the book really all of that?

The prologue of Revolution 2020 has Chetan Bhagat delivering a motivational speech at GangaTech college in Varanasi. It is at this event that the author meets the protagonist of his story — Gopal. Gopal, it turns out, is the young director of GangaTech who wants, Chetanji to come to his home for a drink so that, "I can tell people I had a drink with ‘the’ Chetan Bhagat." Chetanji obliges and is witness to Gopal downing so much Glenfiddich that he passes out and the author ends up taking him to a hospital. Gopal of course survives and recounts to Chetan Bhagat his story — the story that is Revolution 2020. Not surprisingly, there's little of the revolution in Gopal's story. Predictably, Gopal's tale is a love story — an awkward love triangle between three childhood friends — Gopal, Aarti, and Raghav. Gopal is poor — the son of a debt-ridden, suffering retired teacher, whose land is under litigation and who has a mysterious ailment for which he needs an operation. Raghav is middle class, but exceptionally intelligent and is expected to crack the All India Engineering Entrance Examination (AIEEE) and the Joint Entrance Examination (JEE) examinations. Aarti is the pretty daughter of a well-off District Magistrate and she has a grandfather who was once a Chief Minister of the state. Each character, like in a movie, neatly represents a particular background and type. As is expected, Gopal falls in love with Aarti who actually loves the idealistic Raghav.

As the story progresses, Raghav cracks JEE, Gopal is unable to get through in spite of two attempts (including a one year stint at Kota's fabled coaching centers — allowing Chetan Bhagat to give his two bits on how the coaching class industry operates) and carries a chip on his shoulder about his failure and Raghav's success. To add to Gopal's misery, Aarti and Raghav get together after Gopal moves to Kota to prepare for his second attempt at JEE. Aarti relegates Gopal to the role of her best friend. Soon, Gopal in a quest to show Aarti that he is worthy and a success, partners and becomes involved in the machinations of the local corrupt MLA. With the blessings, the clout, muscle, and the money of the MLA, Gopal embarks on a road that leads to the building of GangaTech — a private engineering college. The college is actually a means for the politician and his associates to whitewash their black money while catering to and making money off the many students who don't get into the IITs or who haven't scored enough to win a government seat in an engineering college. So like the Kota episode in Gopal's life earlier, the GangaTech episode enables Chetan Bhagat to write about the corruption in the educational system and the unethical way in which engineering colleges are set up and operated.

Raghav, who graduates as an engineer from BHU, takes up a job as a reporter for a newspaper. Gopal by now is the director of GangaTech. Already vengeful for having lost Aarti to Raghav, Gopal's corruption is now pitted against Raghav's idealism — an idealism that wants to bring about a social revolution by the year 2020. And this is where Bhagat's decision to firmly entrench himself in Gopal's shoes and perspective backfires. So firmly is the story Gopal's that there is very little of Raghav’s life in the book. Beyond numerous references to Raghav's scrupulousness, idealism, and his hankering to usher change in society there is nothing else. There are no worthwhile clashes between the two — only Gopal's grudge against Raghav for stealing his girl and for cracking JEE and Raghav's insufferable and naive faith that a people's revolution will set the country straight. The story suffers, and there is no revolution in the book.

Even as a love story, Revolution 2020 offers nothing unusual or novel in the rivalry between two friends vying for the affection of one girl. A love story is memorable primarily due to its characters and their chemistry. Gopal, Raghav, and Aarti are caricatures. I have already pointed out how the three represent different economic backgrounds and types. Gopal is meant to be the poor boy who wants to achieve big and wants the beautiful girl. Sadly, he lacks the money to help him prepare or the talent and tenacity needed to crack a tough entrance exam. Nor does he have the looks and the spirit to impress the girl. Raghav is meant to be the talented one who gets the girl. Aarti is the pretty girl, who is an inspiration to both Gopal and Raghav. She falls for Raghav and when she realizes that she will be always second to his revolution, decides that she afterall did actually love the corrupt engineering college director who is also her best friend. Unfortunately, the way Chetan Bhagat writes about them, Gopal comes across as a self-indulgent and self-obsessed idiot. Raghav comes across as an incredibly naive journalist who writes worse than Chetan Bhagat does. And Aarti, well it is not clear why either of the guys love her for she comes across as having nothing more than air in between her ears and pretty looks. The characters don't develop or change at all, unless you want to consider Gopal and sacrificing his love after finally winning Aarti's affections (through a much contrived and corny ploy that would do Bollywood proud), so that Raghav can continue to be inspired by Aarti and have a chance at bringing about his social revolution.

Revolution 2020 is a below average, clichéd love story that strives to pretend more than what it is by weaving in the themes of corruption and revolution in it. Unfortunately it is too self-indulgent to realize its numerous plot holes, cardboard characters, or its vain "amanuensis" — you really have to read the prologue and the epilogue of the book to see how astoundingly conceited Chetan Bhagat comes across as. In the prologue, Chetanji pats himself as "the" Chetan Bhagat when he agrees to join Gopal for a drink and dinner. In the epilogue, Chetan, perhaps to return his character's favor of revering his celebrity status, tells Gopal that he is a good person. Presumably, the Chetan Bhagat in the story intends to validate Gopal's decision to sacrifice his love without realizing that in a way he is also pointing out to his readers that it is okay to be average as long as you make money. In whatever way you can. Perhaps, Chetan Bhagat is unconsciously seeking affirmation from his readers for making money with his middling talent. Perhaps Revolution 2020 is all about justifying that it is okay to write mediocre and clueless books as long as you intend them to make change happen in the country.
— mandar talvekar Permalink: 11/06/2011

Mandy, Brother,
Did you miss it? Do not review revolution 2020 as a book but as a screenplay. Get it.

I loved your subtle comparison you did with the bollywood actor.

Now, here's my problem as an avid reader who wants to read Indian stories.

We don't have much Indian stories which are well written and appeal to masses.

Till the time some Aamir Khan of Bollywood takes birth in the world of literature......

here's my take from aam admi point of view http://j.mp/r2020review

do let me know ur comments,

Yes, his books cannot be judged by the present literary standards but reader has to at least feel that he wasn't cheated. You can review my blog here
http://goo.gl/8JuJJ

Thought its not much good review. i m also read out his book that's too good,its not mean that i m not read out other author bestseller
books

This book is a typical chetan bhagat which wont make you bored and once you start reading you cant keep the book down... Its a sad ending as Gopal gave up his love... its supposed to be nice but i wanted her to be with gopal.. except she being pretty, i didnt find what is in her for gopal loving her so much... whatever, i liked the book....

I stil can't get over the fact that Gopal who for god sakes had all the things required gave up his love for someone who he thinks will bring a revolution ....I think that is a pretty stupid sacrifice...nobody can guarantee that a person's ideology wouldn't change with time.. that poor clueless ba*%$!rd(Charlie Sheen Voice)

Good book. One must read who loves our country. It gives the definite inside view of what is really going on in our country. We all know the symptoms, and sometimes get frustrated with no cure of it, but It talks about the Cure as well. It may not be inspirational or Fun like Bhagat's earlier ones, but definitely it is an Honest book which expresses the most of the Youth's view, who understands a bit. It may let down to those who doesn't want to face the reality or who wants to be in their world, but those are having a concern, and going through the what is going on in our country for past few years and see through the pathetic condition of the country, will definitely relate to it.

This is no real detailed review.. I just want to say that I really liked the concept and the ideology of author Chetan Bhagat behind the book... For me, this is the best Bhagat book I have read till date.. the idea of revolution in the year 2020 inspire's me as a youth of this nation.. well done chetan bhagat! better thn rest other typical CB novels...