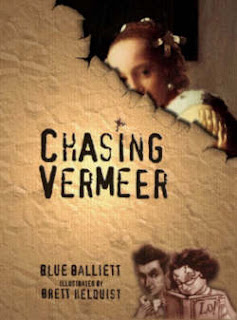 A Da Vinci Code for kids? Actually Chasing Vermeer is far better and accurate than The Da Vinci Code. Mystery and secrets surround the work of the great painter Johannes Vermeer. Around an art theft, a painting by Vermeer called A Lady Writing, Blue Balliett twines patterns, puzzles, blue M & Ms, coincidences, secret letters, and codes. Into this mix she throws a couple of intelligent, curious and "weird" kids — Calder Pillay and Petra Andalee. Then just to notch it up a bit more on the intelligence quotient, Balliett arranges the narrative and the clues around pentominoes (a mathematical tool consisting of twelve pieces used by mathematicians to explore ideas about geometry and numbers. Pentominoes can also be used as puzzle pieces, akin to Tetris, and put together in numerous different rectangles). And then, she encourages her young (and old) readers to hunt for the clues, and use their creativity and logic to solve the mystery in the book.

Eleven-year-olds Calder Pillay and Petra Andalee, both in sixth-grade, are a little "weird." They are both unusually intelligent and curious. They come from eccentric families and have unique hobbies. Petra is quirky with a deep interest in writing and art. Calder is excellent at patterning and compulsively fidgets with the pentominoes he carries with him at all times. Both are receptive to the idea that is one of the themes of this book, that apparent coincidences are not always coincidental.

The mystery in Chasing Vermeer is set into motion when Ms. Hussey, their teacher (who herself is very "non-conventional"), as a part of learning communication, takes her class to an art museum to look for paintings that may possibly contain some messages. Soon a chain of coincidences and various unexplained happenings in Calder's and Petra's lives begin piling up. The two feel that all the strange happenings seem in some way connected with the painter Vermeer. Three mysterious letters show up in their neighborhood, a scrap of which happens to fall in their hands. Soon the two have enough of these coincidences to believe that Vermeer's painting, A Lady Writing, will be stolen. When it is indeed stolen, Calder and Petra team together and try to solve the crime. The two use their intelligence to try to fit the unexplainable occurrences and coincidences together. Blue Balliett enjoys playing with the coincidences, both believable and implausible. The theme of chance and coincidence is weaved cleverly through the novel.

In Chasing Vermeer the illustrator, Brett Helquist (who has illustrated Lemony Snicket's Series of Unfortunate Events), includes an illustration in each chapter. Some of these, in conjunction with the story in the chapter, have a clue in it. Readers, If they find the clues, can have a crack at the mystery along with Calder and Petra. The hidden clues are fun to figure out and really tough to work out. But along with the quirky plot and the wonderful characters, it is these "puzzles" that keep the reader interested in the story and succeed in making the book interactive.

Soon however Calder and Petra come to realize that it is not intellect alone that they have to use to find the thief (who soon enough threatens to destroy the painting if his/her demands are not met) but also bring their imaginations and intuitions to the task. Petra then finds herself communicating in her dreams with the lady in the missing Vermeer painting. Calder finds that his pentominoes give him hints.

It is at this point that Chasing Vermeer and its initial promise begin to crumble away. I had picked up the book from my library intrigued by the possibility of a different an intelligent children's book. The blurb and the introduction to the book by the author, led me to believe that I was going to read something clean and logical. But when the mystery is solved primarily by some very nebulous "feelings" and really farfetched coincidences, it began to feel like a betrayal. The problem is solved not so much by logic but by implausible mental leaps and some supernatural help. It is then that you find the narrative structure of the pentominoes and interspersion of clues within the book for the reader very forced and artificial. A mystery, too me, needs to be tight and offer all clues to the readers so that they too can have a chance to solve it. If a book offers to organize the clues around a pattern of pentominoes and then sneaks in a bit of hocus pocus it feels like the author is taking too many liberties with both the story and the reader. Things are often connected in ways by Balliett that no reader can fathom. It is the way the mystery is solved that makes a largely interesting book disappointing in the end.

Having said that, Chasing Vermeer still has much going for it: charming and likeable characters, Brett Helquist's magnificent illustrations, and the weaving of codes and clues through Calder's pentominoes. I am sure the book does succeed in one of its stated aims — to get children to think about art (the book also includes two reprints of Vermeer's paintings) as something cool and relevant to their lives. Even for a jaded and cynical adult, the book did a good job in piquing my interest in puzzles, art and art history (at least enough to spend half a day in reading numerous articles on Vermeer and Pentominoes). Readers will have no problem in going along the journey with Petra and Calder and make an enthusiastic attempt to decode messages in the book. If only the book and Balliett had delivered entirely on its intriguing premise Chasing Vermeer would have been both a different and a thoroughly intelligent book. It however delivers only half the promise. Considering however the kind of books dominating the children's book scene these days that half promise still isn’t half bad.

its too.... good that i have no words to say