Book Review: No Place Like Holmes by Jason Lethcoe 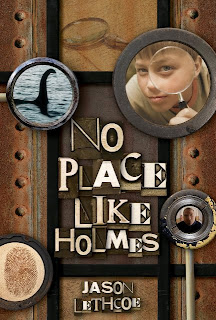 What would you expect from a book that tries to be clever (and only succeeds in eliciting a groan) with its title? I read Jason Lethcoe's No Place Like Holmes, without expecting much from it. At no point in my reading did it feel that the book would attempt to change my opinion of it. No Place Like Holmes, and we might as well get this out of the way, is yet another book that tries to sell itself by trying to provide an alternative to Sherlock Holmes — the detective, the history of his times and the hagiography around this fictional legend. Jason Lethcoe, however, is no Arthur Conan Doyle and his Griffin Sharpe comes off as a watery adolescent imitation of the great detective.

When the novel opens, Griffin Sharpe (so called, as you must have guessed, because he is sharp, has keen eye that notices every tiny detail, and has a "mathematical mind"), a young American boy, has been sent to live with his uncle in London for the summer at 221 Baker Street. Griffin has never met his uncle. Griffin, naturally because he has heard so much about Sherlock Holmes, and because he wants to be a detective one day, is inclined to believe that the great detective is his uncle. Griffin hopes finally of meeting someone who will understand and encourage his mathematical bent of mind and his observant eye. It turns out that, Griffin's uncle lives at 221A Baker Street under the shadow of the great detective residing at 221B. Griffin's uncle, Rupert Snodgrass, is also a detective — one who is extremely bitter about the success and the fame of his neighbor (Snodgrass’ goal in life to solve a mystery before Sherlock Holmes). It also turns out that Snodgrass is extremely poor (all the cases go to Sherlock Holmes) and hence resents having his nephew is with him for the summer. Snodgrass, however, has the knack for inventing astounding steampunk devices (think of the devices you see in Wild Wild West) that include a mechanized butler and a submersible.

Griffin is extremely disappointed to find the unkind Snodgrass and not the cool Sherlock to be his uncle. However being a "good Christian,” (and more on this later) he tries to understand, forgive and help his uncle. An opportunity soon presents itself when Griffin stumbles upon a case that is supposed to be for Mr. Holmes, but as he is not home at the time of the problem — the case becomes Snodgrass’ to solve. With Holmes not available to take the case, Griffin convinces the client to come to his uncle. Griffin and his uncle then step in and take the case.

Mrs. Dent, the client, believes that the Loch Ness Monster, which suddenly appears in the Thames, swallowed her husband. Those who were witness to his disappearance believe the same.  Griffin and Rupert are on the case and need to figure out what really happened. From then on, the nephew and the uncle plunge into a mystery that is heavy on action. Events and vile plots threaten not only the Queen and the Big Ben but also Sherlock Holmes and all of London are at risk. Nasty villains and quirky characters and technology (Snodgrass' inventions) populate the narrative. Interwoven in this adventure are some of the well-known characters from Conan Doyle's Sherlock Holmes. Mrs. Hudson appears, as does Dr. Watson. With Sherlock Holmes around can Prof. Moriarty be far behind? The arch nemesis of Sherlock Holmes is also a part of Lethcoe's plot.

In the process of unraveling the mystery, Snodgrass comes to appreciate his nephew's intelligence and unique abilities. Griffin comes to know why his uncle is so embittered about Sherlock Holmes. Snodgrass also finds his true heart, and thus redemption, beneath all his disappointment and bitterness. Throughout the book, Griffin is concerned for his uncle's well-being. This finds expression through Griffin's attempts to force his love for god and faith upon Snodgrass.  In fact, it is this theme of religion and redemption that comes across strongly and intrusively in No Place Like Holmes and mars the mystery/adventure that the tale is supposed to be. Griffin and his uncle often find themselves in difficult situations at various points in the story. They overcome these quite easily with Griffin praying to God for help. Perhaps the author is trying to preach "Christian values" and humility towards God through the book, but this emphasis on faith and Christianity comes across as heavy-handed. The emphasis on Christianity, Christian values, etc jars more because none of it flows with the rest of narrative. The numerous religious and Biblical references are all intrusive and irritants. Even with Griffin, his faith and advocacy of religion go against the grain of his essential character — that of a scientific and mathematically-minded adolescent. Each time, in the story, when he prays to God for help, it may reinforce religious values but it breaks the narrative flow and makes for bad story-telling. I think, most readers — even young ones, would recognize that the prayers and faith have been hoisted on to the story to make a point and resent the way religion detracts from the story.

With an obliging God to turn to, you know how the story is going to turn out for Snodgrass and Griffin. The two unlikely heroes will of course save the day. But what about Sherlock Holmes? What is his role in the entire mystery? And does Snodgrass change his view of Sherlock? Possibly these are the only questions whose answers intrigue you in Jason Lethcoe's attempt at a mishmash of mystery/adventure and Christian teachings. No Place Like Holmes will attract readers with its promise of an alternative "history" and perspective on Sherlock Holmes but it is difficult to see the story maintaining the attraction through the course of the novel. Which should worry the author and the publisher — No Place Like Holmes wraps up in such a way that leads to believe that we have not seen the last of Griffin Sharpe and his eccentric uncle.

Hopefully, Lethcoe will leave Sherlock Holmes and other loved fictional characters alone in the sequels.

ITS A LONG STORY OF WRITERS USING OLD SCRIPTURES AND MYTHS, CHARACTERS AND PAINT THEM BOLD TO HAVE PROFESSIONAL PROFIT. I THINK ITS ONCE AGAIN A TRICK OF WRITER AND PUBLISHER TO GAIN MORE