Book Review: The Book of Dead Days by Marcus Sedgwick 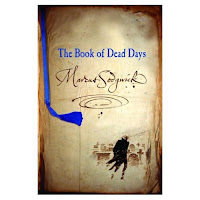 Warning: Mild spoilers ahead
Is it possible to escape a Faustian bargain? How? At what cost?

In The Book of Dead Days, Boy (who has no knowledge of his origins or of his real name), helps his master—the magician Valerian, look for a way out from his Faustian pact. In the process he also finds clues to his own past.

Marcus Sedgwick sets his tale in a European city sometime in the eighteenth century. The actual story plays out during the Dead Days between Christmas and New Year's Eve, "when spirits roam and magic shifts restlessly just beneath the surface of our lives."

Valerian, a stage-magician-cum-inventor performs his illusions in Korp's Theater with the assistance of his apprentice and servant (more of a slave), Boy. Crowds flock to the theater to watch Valerian perform his many tricks and especially to witness his "Fairyland Vanishing Illusion". Boy was found by Valerian many years ago when he tumbled out of a small hollow in the roof of a church right at Valerian's feet. Impressed by the Boy's ability to squeeze himself in the smallest possible space (and realizing that this ability would be of much use to him in his illusions) Valerian takes the Boy as an assistant for his magic tricks. Boy, who has no knowledge of his past, slavishly follows Valerian's every bidding.

Some fifteen years before, Valerian had made a pact with evil spirits that "transcend time and space" in return for wealth, power and the woman he loved. As his time of settlement approaches, Valerian is desperate to find an ancient and very powerful book which he believes contains the answer to avoiding his fate. Boy helps him in his search. But their lives change menacingly during the Dead Days. Valerian sends Boy out on an errand but Boy flees when the man he was sent to see is killed. While running away from the scene of the awful murder, Boy bumps into Willow, an orphan and the assistant of another performer at the theater. She too has just witnessed a similar sight herself: the murder of the manager of Korp's Theater. Both Boy and Willow however are caught and jailed by "The Watch". Valerian breaks into the prison and helps them to escape. He needs the obedient and loyal Boy (if not the quick-witted Willow with her numerous questions) in his quest for the book. From then on Boy and Willow are drawn into a sinister and Gothic quest with Valerian. Kepler- an inventor, a long-time friend of Valerian, also assists them. Its only a few days to the New Year when the devil will come to take what Valerian had promised all those years back. Valerian will do anything to save his own skin—even sacrifice the lives of others. This potentially puts Boy and Willow in grave danger even if they don't expect so.

Mystery and intrigue are at every turn in this engaging quest. Their search for the book, leads to a number of harrowing escapades. They search through graveyards, underground sewers, in the high and low places of the city. Valerian believes the book is hidden in the grave of one Gad Beebe. While searching through the largest of the city's graveyards, Valerian is attacked and his arm is broken by grave robbers. Kepler disappears. And there's The Phantom, the being that is going around killing the City's inhabitants. The three eventually find what they are looking for but the consequences of the find are not exactly what they expect, and Boy at last finds a past and a destiny he never could have imagined. Readers will probably find the twist in the end predictable but it still has an impact powerful enough to throws up a number of crucial questions that would need answering.

Sedgwick's tone is deliciously creepy and shivery. This foreboding and often macabre fantasy should appeal to all who like Gothic tales. The story for quite a bit progresses as Valerian and his two helpers move from graveyard to graveyard and as they search various graves. There are quite a few scenes of grave robbing. The Book of Dead Days also echoes that Gothic masterpiece: Mary Shelley's Frankenstein. The Master of City Burials splices together the parts of various animals and then attempts to resuscitate animals from the dead.

A feeling of gloom and inevitable doom pervades the story. Sedgwick's style is very visual and cinematic. Sedgwick is a marvel at creating atmosphere and painting his settings: be it the haunting cemetery in the night, the catacombs beneath a village church, or the claustrophobic subterranean maze of sewer tunnels. But he is at his best when he describes the fetid and squalid city where most of the action takes place. The falling snow and the biting cold only add to the bleakness and gloom of the tale. But there is still some warmth and love amidst the cold and evil.

Sedgwick limits his plotting to Boy's point of view. Therefore a number of things in The Book of Dead Days go unexplained and one wonders if the point of view of the story was a device that Sedgwick chose to paper over those aspects of the tale he had no wish (or hadn't thought through) of telling. We don't get much background information about Valerian's past. Sedgwick always has Valerian telling Boy that there isn't enough time to explain what is happening. While this serves the purpose of keeping the plot in motion and the suspense high, it leaves a lot of story threads loose at the end. The mysterious murderer, The Phantom, whose murders set the plot into motion, vanishes and is never heard of again. Kepler too appears at convenient points in the story when the characters (and the author) need help getting out the hole they find themselves in. Kepler's motivations and his later actions are scarcely explained.

It appears though that Sedgwick has continued the story of Boy and Willow in a subsequent volume: The Dark Flight Down is the concluding book of this story. Perhaps all these questions will be in answered in the sequel. For the moment, if you get your hands on The Book of Dead Days, read this fantasy for its atmosphere of very tangible sense of evil and the brilliant setting and for an intriguing variation on the story of Faust and his pact with the devil.
— mandar talvekar Permalink: 10/01/2007

Ill hope you have not too much to work with.I have only a question read some of youre books.You invention is very exiting and Ill have asked me from were du you have these streching storyline? Caus in the Future want makea Story too suggestion are not realy good.
How can Ifind good Ideas for a extingstory?