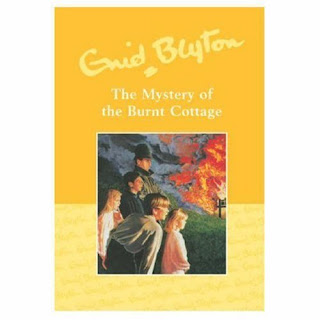 Remember Fatty? The Five Find-Outers and Dog? Recently I had one of my many bouts of regression — a time when I find I can only read the stuff I had as a kid. During my last such bout, I decided to do a marathon of Enid Blyton’s Five Find-Outers and Dog Mystery Series. Having acquired all the 15 books for my Kindle, this would be the first time I could read all the books in the sequence they were published. Of course, for a literature student, this also means that one gets to see how the series, stories, and the characters developed over time.

I havent read this series, I have read the one where you have the girl named Georgina who hates being called by her name. The five are made up by 2 guys, 2 girls and a dog. And when it comes to things like cleaning up, looking into matters of food, its always the girls who end up doing it. So kinda sexist.

Hi Kasturi,
You are referring to the Famous Five. You are right, Enid Blyton does come across as sexist when viewed through the current perspectives of gender and political correctness. However one has to consider the sensibilities of the time during which she wrote her books.
I believe there are some editions now available of her books which have been "corrected" to reflect current notions.

Agree, it reflects the sensibilities of those times.Not criticising, just pointed it out, because it stood out.

I've been revisiting these, too, for the same reasons. So much better than the famous five (although my first crush was on George). I share your observations.

How about something on the Moomins books?

I'm a huge fan of Enid Blyton, especially the Mystery series,and I never discussed the Fatty/Bets pairing with anyone because I thought it was just me :p but apparently someone else feels the same about them! I looked the pairing up on fanfic but found no results! I write fanfiction too, so maybe you and I could try our hand at this! What say you?

I used to read these back in my childhood days. They were slightly more grown-up than the famous five ones. Fatty was a true hero, able to do everything, know everything, and get out of any trouble. And he also always had lots of money for anything they wanted to do. Most of the rest were, as you said, just ciphers. Except Bets, and Ern when he appeared. I wonder if he's still called "Fatty" in the modern editions, or if they've changed it to "Freddy" (as his real name is Frederick) or something.

Very well written post! I just started re-reading these books after about 15 years and it's amazing how I skipped over things like class distinctions as a kid!

Great post! I grew up in Karachi reading Five Find Outers. Loved the small town feel. Yes, we now see the class distinctions in her work but as kids we just drank all of it like lemonade.

I've only discovered the Five Find Outers in the last year or so. I never knew this series as a child and am reading them for the first time out loud to my 9-y.o. son, in order. They are fantastic reading-out-loud books. You can put on different voices and accents, and the chapters are a nice length for bedtime at about 10-15 minutes each depending on reading speed.
We've just finished the Vanished Prince. I really enjoyed the rapport between Goon and Fatty here. I thought Goon's anguish at realising that he had been duped by the children's dress-ups was beautifully written. There's a moment when he lets his guard down with Fatty and bemoans his own gullibility and his fears for his career. It's my favourite bit in the series thus far.