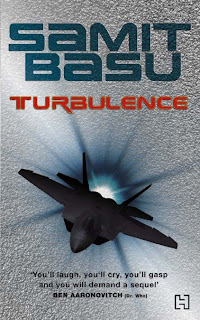 Warning: Mild spoilers ahead
Turbulence is the tale of some people who alight from BA 142 — the flight from London to Delhi, and find that they have acquired superpowers. These superpowers are linked to their deepest desires and wishes: Aman can hook himself to any computer, access any database connected to the Internet or make calls anywhere by just dialing the numbers in his head. Tia, an overworked mom in an orthodox family who yearns to be able to live all the lives and experiences denied to her, finds that she can now split herself in multiple bodies. Jai finds himself to be the perfect and indestructible soldier, Vir acquires immense strength and the ability to fly. . .
Samit Basu provides readers with just this sketchy origin story (no one fathoms why people have received superpowers). He then takes away the costumes from these “superheroes” or “X-Men” and puts them into a situation where they have to deal with the real world and each other while deciding how to use their powers. Samit Basu, like in his other works, deliberately breaks with tradition, and undermines stereotypes. Turbulence aptly reasons that some comics or graphic novel writer has done already depicted every conceivable superhero and superpower. Basu's superheroes are in our world where such comics and films are commonplace. Aman, Tia, Vir, et al are already aware of all the sartorial and ethical choices that they have to consider. They even “know” what their decisions for the “greater good” should be. Turbulence is about how they struggle to arrive at those decisions in the more complicated real world, where issues are obviously more intricate. His characters ponder what to do — take over the world, fight those who are taking over the world, solve world poverty, the Middle-East crisis — what the right decision is. And they realize that both their actions and non-actions have significant and dramatic repercussions on their world.
A group of the “good” superheroes soon find themselves wondering whatever happened to all the British and other non-Indian passengers on the BA 142 flight — they have just disappeared. Many of the Indians with special abilities have also vanished without a trace. Is some super-villain eliminating killing all the other people on that flight? Why? After much reluctance, the good people unite to investigate the disappearance of the non-Indian passengers and to resist the gang of super-villains that is aiming that is aiming for world dominion. Their national loyalties and patriotism are strained and questioned — about the only thing that real world graphic novels or comics don’t prepare them for is to find themselves in a world which is awakening to the fact that Superman and other superheroes exist, except they are not American. In arriving at answers and responses to the world and in understanding their unique abilities and what to do with them, the characters come to understand the limits of human responsibility.
The book's premise is largely interesting but the execution leaves a lot to be desired. Turbulence is an improvement from Samit Basu's forgettable attempt at young adult fiction — Terror on the Titanic: A Morningstar Agency Adventure (Do yourself a favor: Don't read it). Readers who pick up this book expecting something on the lines of Basu's Gameworld Trilogy will be disappointed. Turbulence doesn't even come close. A part of the reason for this could be the direct and up-front nature of this book. Samit Basu's strength and skill likes in his weaving of references and allusions in his books and his humorous and playful twists on established genre conventions and stereotypes. While there are the obvious references to X-men, there is not enough “play” with this angle. Basu thus fails to play to his strengths which were so strongly on display in the Gameworld Trilogy. Turbulence would have benefited with taut writing and some memorable characters to make a quirky concept even quirkier. More importantly, it could have done with a generous dose of irreverence and the playfulness to do justice to the novel's interesting premise. For a concept begging for insouciant and irreverent treatment, Turbulence isn’t postmodern enough.