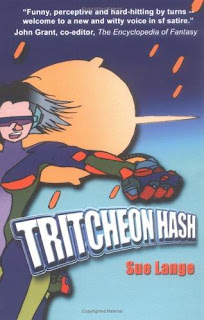 About a millennium into the future, the universe is a lot different. Many generations ago from 3011, the year in which Sue Lange's Tritcheon Hash opens, women decide they have had enough of the testosterone fueled violence and messiness of males. They pack up and over the next decade or so, leave the men behind on the polluted and resource-depleted Earth and board starships to Coney Island. Coney Island is named after the amusement park-turned woman's penal colony-turned back to amusement park on Earth. Coney Island, light years away, is the all-human female planet, a refuge from and in many ways a complete opposite of, the now completely-male Earth. Here on Coney Island, women indulge in vegetarianism, aromatherapy, and a whole lot of peaceful and "womanly" activities that are the antithesis of the aggressive male-dominated culture they left behind. The women prosper and over the generations evolve a culture and society that epitomizes everything that is the opposite of war-mongering, unhygienic, and "un-cultured" males. In fact, ever since the absolute separation of the sexes, Coney Island has over the centuries even developed technology that surpasses that of the men back on earth.

The women in Tritcheon Hash have adapted and learned to live in a world devoid of the male species. The human females on Coney Island are highly paranoid and wary of Earth. Contact with Earth is extremely limited — confined to once a year when they swap male babies for enough frozen sperm to last their planet for another year. Men, since the separation, have mucked up Earth even more — a perpetual belt of garbage now encircles the planet. This sea of crud blots out the sun, making the human males fight their petty, and numerous, wars in artificial daylight. Plant life is thus highly limited on Earth, and circumscribed to a few areas which have been painstaking reclaimed from radiation fallout.

Tritcheon Hash or Tritch is the eponymous protagonist of Sue Lange's novel. She is brash, fearless, tough, and smart . . . a woman in love with speed. She is a test pilot who loves spaceships that are fast. Her job is to test the newly developed faster-than-light spaceships. She is married to the lovely Drannie Cove and has two daughters. Tritch, on the surface, appears to have everything a woman would want from her life. But within her, there's a knot of dissatisfaction that threatens to come undone and unravel her life. Her marriage to Drannie Cove has dwindled into an unsatisfying and unhappy relationship. Drannie has been acting distant and apathetic, devoting her full attention to their two daughters. Tritch's been spending more time sitting on her butt waiting for the ships she tests to actually fly than she's been enjoying the thrill of space flight. She's also increasingly haunted by an experiment that she was a part of when she was training at Coney Island's military academy — a group of women cadets and a visiting male students are tossed together to see what would happen. The experiment is a spectacular failure, thanks to the aggressive and uncouth behavior of Slab Ricknoy and his dust-up with Tritch during an exercise in which they were to partner each other. Tritch could do with a break.

The opportunity comes in the form of a request for reunification from the males. There are enough people on both sides wondering if that may be a good idea. But paranoia of the males has become the second nature for the inhabitants of Coney Island and while there are sufficient people interested in the reunification idea they want to exercise all possible caution. A decision is made to scout the enemy. So, because of her prior dust-up with Slab Ricknoy, her excellent credentials as a pilot, and her "military" training, Tritch is recruited for a clandestine mission to journey alone to earth, make her way through the layer of garbage permanently obscuring and orbiting the old home planet, and to see if men have managed to evolve out of their wicked, meat-eating, leather-wallet-carrying, war-mongering and aggressive ways. Tritch is excited about her mission. Not just because the idea of espionage and flying the fastest spaceship around — equipped with the "Lighterator" sounds thrilling, but also due to the possible chance that she might somehow may manage to again meet the intriguing Bangut Walht — the "forbidden" and "taboo" man — she met during the experimental exercise back in military school.

Tritch's exceptional skills as a pilot see her through the layer of garbage but she damages the ship during the tricky maneuver and crash lands on Earth. The crash-landing leaves her unconscious long enough to be captured by the one man she really hopes not to see — Slab Ricknoy who is now an aggressive and bellicose military leader in charge of one of the many wars on Earth. Somehow, Bangut Walht also finds himself thrown in the mix of circumstances. Ricknoy's aggressive stance against Tritch and her and Bangut's reaction to it threatens to trigger an intergalactic incident.

Will Tritch escape the clutches of Ricknoy? Will she and Bangut "get-together"? Will she be able to escape Earth, now that her spaceship is damaged and in Ricknoy's custody? What about Drannie and the kids? And if she does manage to escape and return to Coney Island, will Tritch recommend reunification or are the sexes destined to stay apart? The answers to these questions occupy the rest of the story of Tritcheon Hash.

Though it is presented as science-fiction, Tritcheon Hash is primarily a satire. The "science-fiction" is merely a wrapper that provides a world, a reason, in which the story can be played out and explored. Sue Lange uses satire in Tritcheon Hash to poke fun of various gender stereotypes prevalent in the current times. Satire, at most times, is tough to pull off. An author can err on the side of the serious, emphasizing the "message" and alienate the audience who would find the heavy-handed treatment boring. An author can also err on the other extreme — trying to explore every incident and opportunity to poke fun, elicit laughs, and come across as silly and frivolous. Sue Lange, for most of Tritcheon Hash, manages to strike a balance between the two. The science fiction wrapper for the story allows Lange to exaggerate stereotypes and then satirize them in interesting ways by making them sound perfectly logical and sound in the fictitious world. The satire and humor is born out of the play between the exaggerated notions of the characters in the fictitious world and similar notions in the real world. For example, everything on Earth is made of meat products. Males on Earth grow plants just to feed animals and then make everything out of meat and leather. Sample Tritch's reaction on entering Bangut's living quarters for the first time:


The place was orderly—surprisingly so, in fact. No socks draped on heat disseminators, no dirty underwear hung on the back of a chair. Last week’s beer-bash flotsam was not floating about in knee-deep water. The room appeared not only neat, but also tastefully decorated: curtains matched throw pillows, furniture covers had been chosen in stylish auxiliary colors, and a big rug tied everything together. No animal heads were mounted anywhere.

Lange also uses language effectively to emphasize the separation between the sexes and further reinforce the satirical intent of the story. Anything to do with male-female relationships and procreation is described in highly technical terms (a penis is always referred to by Tritch and others on Coney Island as the "Penile Apparatus"). Tritch and the females of Coney Island over the long years of separation have created a slang and manner of speaking that is unique to the planet and that produces some very funny misunderstandings when Tritch talks to the men in the book.

While the satire and humor is definitely a strong point of Sue Lange's story, she does lose her way towards the end. For most of the length of the novel, the story is extremely fast-paced. But towards the end Lange seems to lose her grip on the plot — it almost feels like the author knew how to develop the situation and take it to its climax but hadn't given a thought to how she would handle the resolution of the story. Like Tritch, the plot of the book too drifts at the end.

The characterization in this novel is tricky. One would normally consider sketching in finer details make for a better character. Lange paints Tritch and especially her male characters with a very broad brush. The characters largely are representative of various stereotypes. General Anschoss takes on every generic characteristic of any "General" in any book ever written. Slab Ricknoy, is the archetypical swaggering, aggressive man. Bangut is the stereotypical "sensitive" male. But when you understand that the author's purpose is to make fun of various gender stereotypes, you realize that painting the characters in broad brush strokes was the right (it may have been unintentional) decision. These conventional characters make it easy for Sue Lange to satirize male-female gender perceptions about each other.

Where the novel fails to impress is in its "science" part. For a novel that positions itself as science fiction, there is very little science in the story. Most of it is cosmetic and purely used to create atmosphere. In a science fiction story, at least to me, the science (whatever rules it obeys in that world) should be the reason of the story and should be the primary means of taking the story to its climax and resolution. The only science fiction in the novel is the faster-than-light ships powered by the lighterator and a few other similar token nods to science (plants that soak up radiation, gigantic sails that filter and "mine" the air for metals). The notion of the separation of sexes which is the basic premise for the story, could be easily setup without requiring the science fiction part of the story. Tritcheon Hash is a character-driven story in which the science-fiction is merely cosmetic and incidental. To me a book that is classified into the genre and then turning out to be not hard core science fiction is a big disappointment.

Tritcheon Hash is a book with undeniable energy. It is often funny, and but for the end, never dull. The characterization fits the book's purpose perfectly. If only Sue Lange had also paid attention to the science in her book, Tritcheon Hash would have been a unique coming together of satirical intent and science fiction.