Marginalia #2: It Rained All Night by Buddhadeva Bose, Translated from the Bengali by Clinton B. Seely 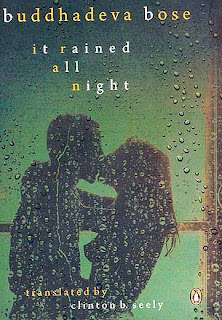 If you have studied English Literature in an Indian college or university, there is no escaping the great debate and divide: Native Writings Vs. Indian Writings in English (IWE). While there are many points of argument between the two it essentially boils down to these: the "Nativists" largely contend that literatures in Indian languages are far superior and "Indian" than the ones written in English in India. The debate between the two sides of this argument can be so heated and full of academic invective that I am surprised that the two sides don't settle it with blows. I don't belong to either side. As long as the literature is readable I don't really care if some people consider the "vernacular" writings to be better to those written in English or if another group of people contends that it is IWE that is currently India's face in the literary world and encompasses a sufficiently strong body of work to be considered a world literature. I do think that while the literary merits of the different books in various languages and cultures can be a matter of debate, debating the "Indianness" of a particular literature is too narrow minded a focus. I also consider Indian Writings in English to be sufficiently "Indian".

A bigger issue while debating the literary merit of any book is to ensure that it is widely accessible and available to as many readers as possible. Given the huge diversity of our peoples, most Indians know at least two or three languages. However usually the proficiency is "functional" and a person would prefer reading in a single language (or perhaps can manage in another as well). That does mean that a goodish bit of the native Indian literatures are not accessible to people who don't speak that language. Similarly IWE is not read by people who don't know English. This is where translations play such a big role. I am surprised and dismayed that India doesn't have a strong publishing in translated works.

Penguin Books since many years has tried stepping into this space. For more than a decade now Penguin has been translating and publishing classics of Indian literatures into English. From the few translations that I have read, they are doing a far better job of promoting and making Indian literatures more accessible than the rabid academics.

All that about Indian literatures, IWE, and translations was prompted after recently reading It Rained All Night by Buddhadeva Bose. This slim novel was first published as Rat Bhore Bhrishti in Bengali 1967. I picked up the translation by Clinton B. Seely. Some random marginalia about the book:
— mandar talvekar Permalink: 4/01/2012

Hi Shrey,
I don't know if this book is available in e-book format. I purchased the book from Flipkart - it is less than 150 INR.