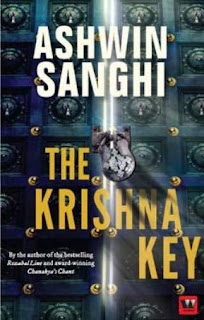 Reading Ashwin Sanghi's The Krishna Key -- nearly 500 pages long what with a references section appended to the end to lend it that air of researched seriousness -- with the specter of Dan Brown's The Da Vinci Code hovering insistently over it, was not going to by any means easy. Particularly if within the first few pages of the book, you start feeling The Krishna Key is trying really very hard to be Sanghi's The Da Vinci Code -- there is a historian/Symbologist professor who is accused of murder, there's an intelligent and  beautiful female accomplice who helps the wrongly accused professor escape the law and then stay ahead of it, there's a female version of Bezu Fache called "Sniffer Singh", there are of course quite a few ritualized murders, there's a mysterious, religious killer directed by a "Mataji", there's much "heltering-skeltering" to various locations of religious and mythological significance, and above all there's some vague but powerful ancient religious-mythological-historical secret around Krishna which different groups are trying to uncover.

It so happened that at the same time as i was reading The Krishna Key, I started dipping into (what to me seems to be a wonderfully written) Salman Rushdie's memoir Joseph Anton. Rushdie, at a point in the book, tells his friends to help him "Defend the text" of The Satanic Verses. Not that I am going to commit the sacrilege of comparing Ashwin Sanghi with Salman Rushdie, but that line of Rushdie helped recollect a very important lesson learned in my literature classes,  "Discount everything else and analyze the text." And that was the only way to approach Ashwin Sanghi's The Krishna Key -- forget the specter of Dan Brown and The Da Vinci Code, set aside the strong feeling that it is but a recontextualization and Indianization of that best-seller, and read and evaluate the text and story that is The Krishna Key. That, to this reader, felt was the only way to be 'fair' to Ashwin Sanghi's book.

The Krishna Key is Sanghi exploring and riffing on the myth of Kalki - the final avatar of Vishnu/Krishna. Professor Ravi Saini who believes that Krishna, the eighth avatar of Vishnu, is not a mythological character, but someone who existed 5000 years ago, is framed in the murder of his friend. Other murders follow. Soon with the aid of his doctoral student Priya, he turns into a sleuth trying to solve the murders and in the process track down Taarak Vakil -- who the readers are told, considers himself to be the Kalki avatar.  Sanghi tries to narrate this story by mixing the race to unearth the murderer and to understand the entire conspiracy around discovering Krishna's Dwaraka and "The Krishna Key" (believed to unlock a priceless treasure, left behind by Krishna) with a lot of historical-mythological facts and stories. Sanghi also tries to play with the narrative a bit by moving backwards and forwards in time. And he makes an attempt to draw parallels and link his story with the Krishna one by beginning every chapter with an interlude in which Krishna recounts his story from his birth to his death.

Sanghi is however not an adequate enough writer to make this mix work. The book is shaky as a "suspense-thriller" and then falls flat as a tale riffing on the historical-mythical. Sanghi mistakes mentioning numerous historical and religious places in the book, analyzing obscure symbols carved on temple walls and much of such pseudo mumbo-jumbo as sufficient to make a convincing tale. So obsessed is the author with this "research" presented in his book, that he fails to realize that a memorable tale is built on a solid foundation of a decent plot, great characters, and some good story-telling. The Krishna Key has a highly boring plot with derivative, unremarkable, and inconsitent characters and a narrative technique that exposes the author's lack of competence with his métier.

The Krishna Key, thus is quite disappointing. If you liken it with The Da Vinci Code (which at least had a plot with some pace to it), Sanghi's book only comes off as a clumsy and fumbling imitation. View Ashwin Sanghi's The Krishna Key from any perspective -- as a suspense-thriller or as tale that tries to mix history and mythology into fiction -- the book is not up to scratch.

There is this wonderfully caustic comic/poster that is doing the rounds of Facebook for sometime now. It attempts to capture "That moment when you finish a book, look around,and realize that everyone is just carrying on with the their lives . . . As though you didn't just experience emotional trauma at the hands of a paperback." Quite a few books I have read recently have left me with that feeling. The Krishna Key is just the latest.

This is the best book by Ashwin, compared to the all three books. Nice way of narration, together with Mahabharata story in line. I like the way Ashwin gave us his imagination about the Krishna. The facts in the books looks quite real. At last a nice book for the people who want to know about Krishna.